Wembley Library as a Successful Example of Co-location

One of the trendy topics in Libraries at the moment is co-location.  I suspect one of the most successful examples of this in the UK is Wembley Library in Brent Civic Centre, so I thought I would do a post why.

The most obvious indicator of success are the visit and loan figures.  The first graph shows the monthly visit numbers for the first three quarters of operation (in red, with a comparison to the old Brent Town Hall library monthly figures for the previous year in pale green).

That is an overall 307% increase for the period.  The overall increase in book loans is 80%, and the relevant graph looks like this:

The success strikes me as pretty undeniable, so what are the factors behind it?

Outside the Civic Centre
The first is the area outside the Civic Centre.  The London Designer Outlet, including its cinema, opened in late 2013.  Wembley Arena and Wembley Stadium were already in place, and more and more people are moving into the area as housing gets built.  I hope that Wembley Market Square will also become an attraction (right next to the Civic Centre) that could also bring visitors.  All these attract extra footfall quite outside the attractions of the Civic Centre itself.  If the logic of having a High Street location, which was one of the ideas underpinning our Libraries Transformation Project, holds true, these should all increase the footfall in the Wembley Library.  Of course the Library itself is an attraction that should help bring people to the other attractions, creating a positive feedback loop.

The design of the public realm in the area is also an important factor.  The path from Wembley Park station is deliberately designed to draw people towards the library area.  Similarly, the route from Wembley Triangle over the White Horse Bridge draws people from the Wembley town centre end.

Civic Centre Design
The placement of the Library on the ground floor at the corner of the Civic Centre seems pretty crucial as well.  This probably makes it the most prominent part of the building. 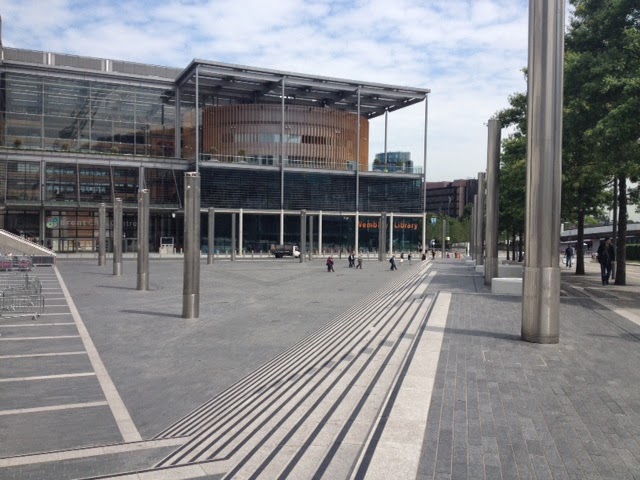 The library is immediately under the Revenue and benefit service that featured on the recent BBC Panorama programme.  It is opposite the Registrars office, which would be helpful if Brent were to adopt a version of some of the recent ACE pilots.  It has a café actually in the library and is near the other commercial facilities in the Civic Centre including eateries and the other café across the atrium.  Some of the retail space in the Civic Centre is due to be rented to a supermarket chain, which should also attract further footfall. 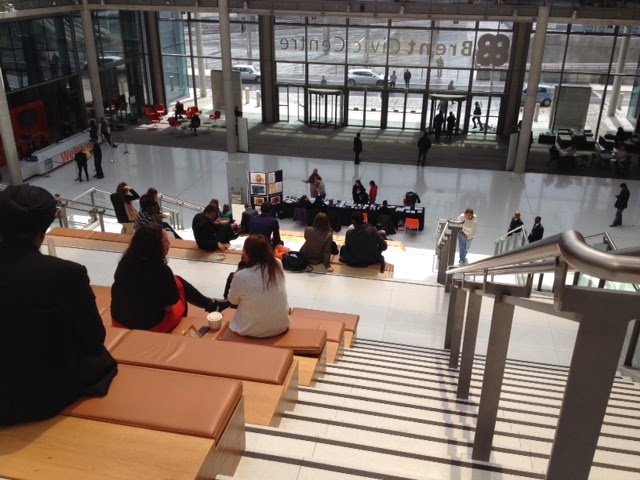 The library is also close to the area used as an art gallery by the Brent Museum service, and various artist exhibitors.

The Design of Wembley Library
The library itself has been designed with flexibility to hold events either in itself, or in the atrium space.  It also has a variety of provisions for computer use ranging from old fashioned deskbound computers to tables for people to bring their own equipment and soft furnishing for ipad users.  The Library also has a specific story telling space in the childrens area and extensive displays areas.  Some pictures can be seen here.

I have added a couple of pictures to this post.  I have also published figures for the graphs here.