Willesden Library Settles into a Routine 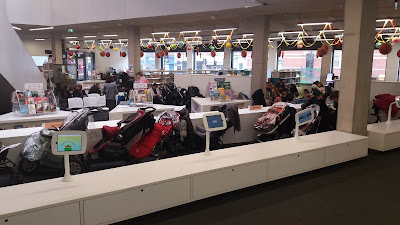 Above is Willesden Library ahead of a recent children's session and the vibrancy of the place is obvious.  I think now even its most vehement opponents would have to acknowledge its success.  However, it is still having issues to do with its day to day management.  The saddest of these is implicit in the warning not to threaten the staff, which has gone up throughout the library.  Unfortunately, this appears to be a regular feature of any public building.

It also seems to be having some problems keeping the toilets working, with the ground floor toilets now kept locked routinely.  If one or two of the others go out of order, this leads to excessive demand on the others, and I have even seen men apparently coming out of the womens toilets from time to time, which is frankly unattractive.

There is also a question over how the area around the library should be used.  So far it has not really been used for any events, which is a pity as it could be quite effectively I think.  The walkway at the back has been seen with the occasional car on it.  I am not sure whether this is permitted.  The area was intended primarily as a pedestrian space, but it is not designed according to shared space principles.
Posted by James Powney at 08:47