Went to a brillant streetparty in College Road on Saturday. It was started as an initiative by greenkensal, a new community group (web site: http://www.greenkensal.co.uk).
Posted by James Powney at 11:27 No comments:

Executive No Show At John Kelly

Along with various other councillors, I went on a site visit to the John Kelly schools yesterday.

Apart from Bob Wharton, none of the Lib Dem or Tory councillors bothered to show up. Apparently, they are going to wreck the school's chances of a proper rebuild without even setting foot there.
Posted by James Powney at 09:10 No comments: 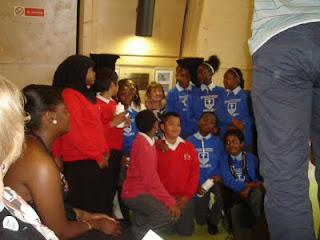 Delighted to attend the opening by Tessa Jowell and Dawn Butler of the new Stonebridge Hub on Friday. This is a new community centre serving the rebuilt Stonebridge estate.

It was particularly amusing to weatch the desperate efforts of Sarah Teather to muscle in on the event. She made a determined effort to be photographed by Tessa and Dawn with a bunch of children from Our Lady of Lourdes and Stonebridge primary schools. Fortunately, the children were roughly the same size as her, so the Brent East MP was entirely obscured.
Posted by James Powney at 13:48 No comments:

John Kelly Boys and John Kelly Girls schools are the scandal of the moment. For years, these schools, which are next to each other in Dollis Hill, have been overdue a rebuild.

The last Labour administration in Brent agreed to finance a compulsory purchase order (CPO) on the adjacent land to help the rebuild. The current schools are squeezed into a site only about a third of the size recommended for the number of pupils. That means that they have very little in terms of sports facilities (OfSted said they were "barely adequate"). It also means that the sole entrance for vehicles regularly causes traffic chaos.

The schools also need the new space so they can "decant" during the rebuilding process i.e. keep the schools going on one part of the site whilst building elsewhere.

It looked like the schools were finally getting the money for the rebuild by becoming Academies (Crest Boys and Crest Girls). Then in June, without telling the governors or teachers or the new sponsor, Brent's Lib Dem / Tory Executive slipped out a report saying that the Council would not buy the land after all.

That would mean the schools retained inadequate sports facilities, the single vehicle access and that the rebuild would take 43 months. Fortunately, the governors were able to persuade the Lib Dems to defer a decision for a month.

Why did the Lib Dems rat on the deal to buy the land? I suspect they want to grab the money that was put aside in order to shore up their budget. Perhaps getting back the £15 million that they stuck in Icelandic Banks last year would be a better option than raiding school budgets.
Posted by James Powney at 14:52 No comments:

I thought I would start a blog about local issues in Kensal Green and Brent generally as there is such a lot going on, but the local papers' coverage is so poor.

I don't blame the local journalists too much as their budgets are cut to next to nothing. One of the reporters told me she no longer has an office, but has to do all her work at home. The Archant papers have just been restructured and lost a lot of their staff.

The result is that the reporting and anlysis of politics in Brent is pretty minimal. Many people aren't even aware that the Lib Dems and Tories run the Council, let alone how useless they are.

So this is in the way of an experiement to see if I can get through to more people, and hopefully get some feedback as well.
Posted by James Powney at 14:33 No comments: