The Guardian reports that the government is seeking to tighten up the rules on political boycotts by Councils.  This sounds to me like another example of DCLG spin exaggerating the newness of a policy.


In fact Council are already restricted from awarding contracts for political reasons.  This was amply demonstrated when Brent Council awarded the waste and street cleaning contract to Veolia.  In that case there were also other good practical reasons why the campaigners' demands were impossible.  However, the primary objection was that political boycotts are unlawful under EU procurement law.  This were widely explained, but some people didn't want it to be true so decided it wasn't.  That is not a good basis for policy making.
Posted by James Powney at 08:27 No comments:

The Kensal Green by election result held few surprises.  Labour won comfortably with 53% of the vote.  That is slightly down from the 63% of the vote in 2014, but still a good result.  The Liberal Democrats will probably be slightly pleased at second place with 24% of the vote, which is a lot better than their calamitous performance in the General Election.  It does signal, however, that their chances of becoming a major force in the Borough are slight.  Quite possibly they were helped by Brent Council's proposed steep rise in parking charges next year.

I think the Tories should feel disappointed at only 15% of the vote and third place.  The small UKIP vote had no real impact, so they can't blame a split vote.  It does not bode well for Cllr Joel Daviodson's attempt on the GLA seat next year.

However, the Greens probably had the worst performance with only 6% of the vote compared to 7.2% in 2014.  The 2014 comparison actually flatters them since the only parties fielded multiple candidates.  The poor Green performance is also in line with their failing in various other Council by elections around the country.  If there ever was a Green surge it has ended and the tide is going out.
Posted by James Powney at 08:33 No comments:

Wembley Art Society at The Library in Willesden 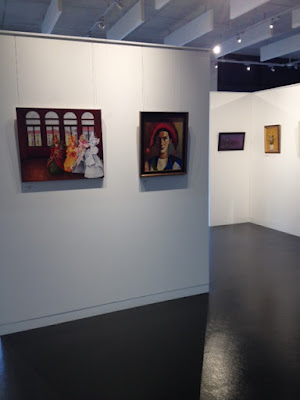 Willesden Library continues to show its strengths with a new exhibition by the Wembley Arts Society.  I find it extraordinary that so much is going on there given the negligible budget

Posted by James Powney at 10:30 No comments:

Lambeth is apparently contemplating a staff mutual for its libraries.  Working out the detail of such arrangements is complicated, and there would be a big risk to the staff if it failed.

Brent has yet to reveal what the rather cryptic mention of libraries in the last budget process actually meant.  I think a user based Co-operative might be worth considering.  Brent libraries have a ready made pool of potential co-operators in everyone who has a library card, and they can be proven to have an active relationship with their libraries through the records of book borrowing and computer use.  Such an arrangement, I think, would be able to exploit the tax avoidance device of not paying business rates which is the cash saving that Brent identified in the budget as (apparently) the main advantage of the proposal.

Whether this cash saving is worth having I think is rather questionable.  As business rates are going to be localised, at least if George Osborne gets his way, any rates not collected on Council buildings simply reduce Council revenue, so it isn't really a saving at all.  The saving, however, remains a line in the budget so I take it that Brent libraries will have to find the money by some other means.  that again underlines the importance of Brent libraries putting together a proper library strategy now that the Libraries Transformation Project has been implemented.
Posted by James Powney at 08:18 No comments:

It is surprising that the news of falling recycling levels in London have not had a greater impact.  Unfortunately, Brent has had the biggest fall in all London (5.6%).

It is tempting to have a knee jerk response and blame obvious candidates like the decision to introduce charging for green waste, but this should be resisted.  Brent and other Boroughs need to take a long hard look at what works and what can be done to at least restore previous levels of recycling.  It is possible that the lower recycling may be partly down to welcome factors, such as the reduction in packaging (which is often recyclable).  Easy comparisons between Boroughs should also be avoided as encouraging recycling can be far harder with certain kinds of housing stock.

I notice that the Standard article also comments on the incineration of waste.  This is cheaper, and surprisingly more environmentally beneficial, than sending waste to landfill, but perhaps the shift towards burning is causing authorities to pay less attention to recycling?  West London, including Brent, will soon see almost all its waste being either recycled or burnt under a new contract that starts next year.
Posted by James Powney at 11:01 No comments:

Martin Francis is trying to stir up mischief in the Kensal Green By election I see.  He is seeking to imply that John McDonnell supports setting illegal budgets.  In fact John McDonnell has said:

“The situation the councils are now in is if they don’t set a budget, a council officer will do it for them. There is no choice for them any more.”

This may seem remarkable given John McDonnell's own past history, but it is simply a recognition of reality.  If a Council such as Brent refuses to set a budget, central government can simply appoint commissioners to do it instead.

"Opposing austerity" in the way Martin imagines he does, which in fact seems to consist simply of attacking Labour Councils, is nonsense. In fact, Martin should look at the various ways in which Brent Council has advanced progressive measures despite the financial cuts imposed by central government.  These include improvements to recycling which are unfortunately now under threat, the greenest public building in Europe, the transformation of Brent Libraries, improvements to carbon emissions, the delivery of regeneration in Brent's growth areas despite the Tories all out assault on housing, various improvements to parks in Brent, a step change in allotments management, a rebuilt Moberly Sports Centre and substantial investment in the Vale Farm Sports Centre as a result of the new contract.

Of course, these kind of achievements would have been far easier if we had a Labour government as we did from 1997 to 2010.  Something that Martin might care to reflect on as he campaigns against the Labour Party.

Another part of the government's all out assault on social housing continues with an amendment to do with away with security of tenure.  Perhaps those who ridiculously argue that Labouyr and the Tories are just the same should think about whether a Labour government would do this or many of the other Tory measures such as the Trade Union Bill, the take over of housing associations, the cuts to tax credits and so on.
Posted by James Powney at 09:21 No comments:

The Future of Brent Libraries

I mentioned the outstanding performance of Brent Libraries yesterday amid a national situation which is generally gloomy.  Numerous authorities are now contemplating shrinking their library services.  These include Fife, Croydon, Barnet, Camden and Hounslow.  It is all drien by George Osborne's 56% cut to local government funding, which is totally unsustainable coming as it does on top of massive cuts in the past five years.

Brent is likely to see continuing library expansion for this year and next year, but after that it looks pretty bleak.  The success of the Libraries Transformation Project in raising both usage and user satisfaction whilst cutting spending shows that a sound strategy is key to minimising the damage from future budget cuts.  That is why Brent Council should be consulting on its library strategy now, not letting the issue drift.
Posted by James Powney at 08:07 No comments:

A Guardian analysis of public libraries has named Wembley Library as the third biggest in the UK.  That is an astounding achievement given that the old Town Hall Library wasn't even the biggest in Brent when the Libraries Transformation Project was started back in 2011. The scale of the change can be seen in the graph I posted here.

At that time Brent Town Hall library had only 166k annual visits which rose to 200k in its final year.  The last annual total for Wembley Library, as published by CIPFA, show 1,169,735 visits, a colossal increase.  I wonder what those who called for Wembley Library to be scaled down, or even scrapped altogether, think of that?  Perhaps they will concede that whatever they think of other aspects of the project, Wembley Library has been a success.

Or perhaps they won't.

Otherwise the national picture for libraries is bleak.  Overall visits fell from 276 million to 265 million last year (down 3.9%).  They have fallen by 14% since David Cameron became Prime Minister.  In contrast Brent libraries have been rising in both visits and book loans, with an overall rise in visits that year of 27.6%.  I have been able to trace Brent library visit numbers back to 2007/8, and they are now at their highest level during the whole of that time.  Judging by the half year figures for this year, that trend is likely to continue, and I expect that the full year figures will go up the year after this as the complete effect of the new Willesden Library becomes evident.
Posted by James Powney at 10:50 No comments: