Brent Council is now modifying its development planning policies.  The length of time this takes is disappointing, but the actual changes are quite welcome.

The spread of betting shops will be made more difficult.  Takeaways and shisha cafes will not be allowed near secondary schools which is something I have argued for for a long time.  There are also welcome change to provisions for drainage to prevent surface flooding and some tightening on carbon emissions.  It is also good to see that the Council is doing its best to protect its affordabl;e housing targets in the present very unfavourable climate.

There is also some material on pub protection, which I will cover in a separate post.
Posted by James Powney at 09:13 No comments:

Martin Francis tells us that Paul Lorber is trying to whip people up to attend the next Barham Trust meeting.  Back in October 2015, the Trust decided to rent out a small part of the building complex to Paul Lorber's organisation.  Despite the length of time which has passed, it seems that a lease has still not been signed.  Paul Lorber told a meeting I attended in Willesden Library that nonetheless he had been in occupation of the site since March, and although he had permission only to use it for storage his activities had been more extensive than that.

Back in October, I suggested that his real intention was simply to use the site to stir up trouble.  This was based on my knowledge of him over many years, including his previous acrobatics relating to Barham Park leases.  Indeed, he also engaged in all sorts of games during the Libraries Transformation Project process.

In fact, if the Committee (which has not published its agenda at the time of writing) is going to award a lease I suspect most of the meeting and the documents will be with held _ as they are likely to contain financial information.

It all seems a rather odd way of doing things.
Posted by James Powney at 11:12 No comments:

Following my positive comments on the environmental performance of Brent Civic Centre the other day, it is worth looking at what BREEAM itself says about the project.  This really is an example of Brent Council being at the cutting edge of progress.
Posted by James Powney at 08:28 No comments:

Passing down Walm Lane, I saw that the Safer Neighbourhood base there is now earmarked as being for "Walm Lane Ward".  Presumably this is the Met. trying to cope with lower resources.
Posted by James Powney at 09:12 No comments:

Brent Council is happily advertising a fall in its carbon footprint of 11.3%, but it would be nice to have a better idea of what this means.  The figures appear to come from this report, although I am not sure why they are press released now.  The report itself is plain that different measures are in use, and the whole area can get quite confusing.

What about Schools?
The figures Brent are highlighting exclude schools, aside from "bulge" schools using Council buildings.  Were schools to be included, it would probably double the building amount of emissions.  Moreover, given the growing number of school places being provided, that element of the emissions might be going up.  Offseting the sheer rise in numbers and the quantity of buildings, there has been a long standing programme to make schools more energy efficient, partly through insisting on high environmental standards at new buildings, and partly through retrofitting technology on existing buildings.

Brent Civic Centre
The building element is the main reducing element, seeing a fall of more than 25% from 2013/14 to 2015/16.  That is from 7,246 to 5,770 tonnes CO2e.  The main contributor to this will be Brent Civic Centre.  As a BREEAM outstanding building, the Civic Centre has an excellent performance in both carbon emissions and in other ways.

The building started to receive staff part way into 2013, which is being used as the baseline for these numbers, but it will have taken time to get a full year effect.  Partly, this is the result of staff only moving in from June 2013; partly it will be because the full benefits only became apparent as staff got used to the new ways of working.  Finally, it took time for Council staff to move out from some of the older buildings such as Brent House, so the carbon emissions will only have ceased once those disposed of.

Other Council Buildings
Brent Council will also have benefited from investment elsewhere.  The new Willesden Library had a much improved carbon performance compared to the old one.  Brent Council has also done some retorfitting of older buildings such as Kilburn Library, although I have explained elsewhere that this is not as good as having somewhere new.

Street Lighting
The diminishing proportion of carbon emissions coming from buildings means that further big fall will have to come from street lighting, as I have argued before.
Posted by James Powney at 12:09 No comments:

Noting my post a couple of days ago, some one suggested to me that the block of flats on the corner of Rucklidge Avenue and Park Parade ( the old Willesden Social Club site) is not especially beautiful.  I agree it is not, although it is a lot better than when it was derelict land, and still doesn't look too bad to me.  Here is the front: 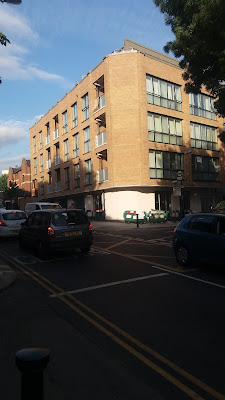 Here is a view from the back: 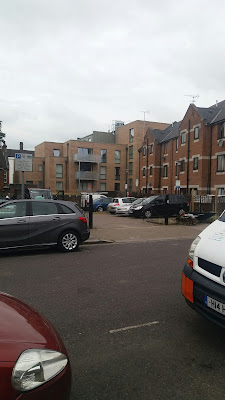 It tapers down toward the properties on Rucklidge avenue for privacy reasons.  The more important thing about the development is that it improves that part of Harlesden Town Centre.  Removing the derelict land designs out an area of anti-social behavior.  The planning enforcement at the Green Man helps with some of the activity associated with that building, and the natural overlooking of Design Works by the people in the new flats will help limit complaints of misbehaviour there.  All of this contributes, albeit incrementally, to the improvement of the Town Centre.

As the planning powers of local authorities are limited, and the resources available for strategic planning slide downward, taking advantage of small incremental improvements becomes ever more important.
Posted by James Powney at 10:36 No comments:

Passing by recently, I noticed that the flats on the old Willesden Social Club site are virtually complete.  I first started to campaign for that site to be built on in late 2005.  I little thought it would take a decade to get there.
Posted by James Powney at 08:21 No comments:

Public Libraries News has an interesting link to the changing uses of technology in libraries.  I get the impression there is very little understanding of how public libraries are changing rapidly.  The rise of WiFi is one, important example of this.  Too often, though, the discussion on public libraries is held as if they had all remained the same since the 1940s.
Posted by James Powney at 11:18 No comments:

Even Owen Jones has stopped supporting Jeremy Corbyn in the Labour Leadership election.  This adds to the vast majority of Labour MPs, former economic advisers, all the living former Leaders of the Labour Party and many others.  If Jeremy is re-elected how can he continue without the support of all these people?
Posted by James Powney at 08:13 No comments:

The Lord Loves a Sinner Come to his Understanding

Martin Francis quotes a local resident on Brent's bulky waste service.  It turns out to be none other than former Liberal Democrat councillor Paul Lorber, who is dissatisified with the way the service now works.

This is ironic as Paul Lorber, when Leader of the Council, introduced charging for what had up to then been a free service.  This was despite their promising prior to the 2006 elections that they would keep the service free.  This was one of a large number of broken Liberal Democrat promises.  After they introduced fees in 2007, the rate of collections fell through the floor.  When Labour came to power in 2010, the free service was restored.  Neither Martin or Paul found time to mention this history.

However, I welcome the interest in how the Public Realm Contract is put together.  I always argued that the time to concentrate on specification was before the contract was awarded, when the bidders were under maximum pressure to give the Council the best possible deal.  Unfortunately, Martin and others were too busy whipping up noise about Israel to pay attention to what the contract was actually about.

Still it is good that they have become interested now.

Monitoring
Martin appears to be objecting to the practice of self monitoring, although this is common in such contracts.   The argument is that getting the contractor to sort out the problems as a first resort is the quickest way to sort things out, and I think that is true.  Martin may not be aware that modern technology allows a much greater degree of tracking that previously.  Provided that the Council is diligently practising open book accounting for the contract, it should have at least as much control as previously.

Enforcement
He, and his commentator, also seems to be a bit confused about the enforcement against litter.  This has ben awarded to a separate company to Veolia, so it doesn't seem to be particularly sensible to bundle them together.  I am not sure if the proposed, punitive, approach will work.  I suspect at this point it is too early to say.