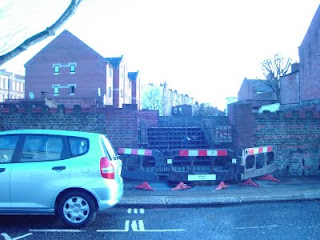 One of the first campaigns I started after election in 2006 was an attempt to get the derelict Willesden Social Club (on the corner of Rucklidge Avenue and Park Parade) turned to a socially useful purpose. To do this I proposed a compulsory purchase order (CPO). In my innocence, I thought it might take a year or two to sort out, and yet here we are!

To be fair to myself, there has been some progress. The old site was, literally, a dump. In the past it had also been used by tramps, prostitutes and drug users. The threat of a CPO did push the current owner to demolish the buildings on the site, making it less likely to attract flytipping etc.. As you can see from the photo above it still doesn't look great, but it is a bit better

It also got the site identified as an where housing should be built in the new Local Development Framework (a document which helps to influnce planning decisions). Octavia Housing, which owns the next door St Joseph's Court on Park Parade, have made an offer for the site, but it has not yet been accepted.

My co-councillor Bobby Thomas asked about this at the last Council meeting, and was told that "the Council has not urgently progressed the CPO." Given the shortage of housing in London, and the need to boost the economy, especially in construction, that seems a shame.
Posted by James Powney at 11:59