What do the Opponents of Willesden Library Think? 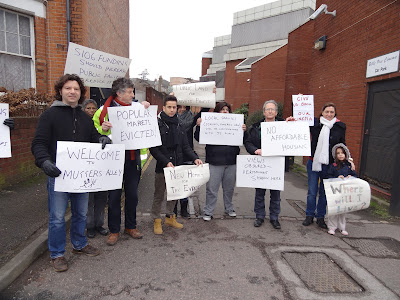 Now that the new Willesden Library is open, I wonder what the numerous opponents of it think?  As well as those who opposed the whole Brent Libraries Transformation Project from the start, there were a number of people who bitterly opposed the Willesden Library rebuild specifically.  You can see some of them in the photo above, which I have taken from the Keep Willesden Green site.

The campaign, which generated rather more heat than light, involved a range of accusations, many of them false.  It also led to a number of imaginative legal objections, quite separate from the Brent Libraries Judgement, including a Town Green application and several claims that the planning process had not been followed.  I always find it slightly bemusing that the redevelopment of buildings so often attracts appeals to often obscure laws and covenants.  There seems to be something rather mesmerizing about appeals to arcane laws.

Still, I wonder what all these people now think of the new library? Does it live down to their expectations, or is actually a very good public facility delivered in the teeth of Tory government cuts?


Once again, comments to this post seem to fail to differentiate between some one discussing an issue and an "attack".  There was a lot of misinformation put out about the new Willesden Library plans when it had yet to be decided.  I just wondered whether the people who opposed the new library still oppose it.  For instance there was a claim that the area at the back would be a dark and dingy "mugger's alley".  Now that people can actually see the width of the alley, does anyone still believe that?
Posted by James Powney at 08:56

Why do you constantly attack members of the community? You seem to think that no one but you is entitled to an opinion about the communities in which we live.
Your arrogance is astounding.
Some people don't think the 'deal' of giving a developer public land with all the subsequent profit made (and no social housing) worth the new library no matter how nice it is.
No wonder you were not selected to stand again. Nasty.