What the Public Think of Brent Libraries 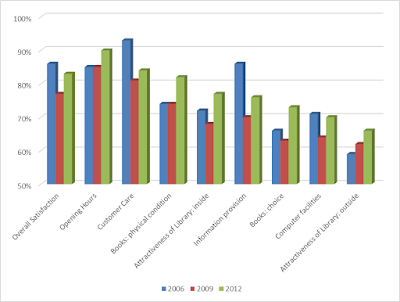 As well as a successful record in terms of increasing visits and loans, Brent Libraries have also seen great improvements in user satisfaction.  Although I have blogged on the 2012 results that came at the end of 2012, about a year and a half after the decision to implement the Libraries Transformation Project, I thought it would be interesting to look at the PLUS results historically.

PLUS (Public Library User Survey) is a survey carried out by CIPFA across all library authorities in England every three years.  The graph above gives figures in three columns using a baseline of 50% to highlight the difference more dramatically.  Blue is 2006; red is 2009, and green is 2012.

Between 2006 and 2009, I think it is fair to say the Council was treading water or even sliding backward.  After the 2011 decision, the green column goes well ahead of the 2009 results on all the criteria.  The actual table of results is here:

Individual Libraries
The Survey also asked about individual libraries.  It is notable that all the libraries, aside from the old Brent Town Hall library, improve between 2009 and 2012.

Brent Town Hall library has now been replaced by Wembley Library.  I shall be very disappointed if the next PLUS survey does not show a big improvement in its rating.  Likewise, "Willesden Library" in the graph is actually the old Willesden Library.  Hopefully, the next survey will again show a boost in ratings.  The biggest jumps in ratings at Kingsbury, Harlesden and Kilburn all seem to coincide with major refurbishments at those libraries, a sign that the quality of the building improves all other aspects of the library. 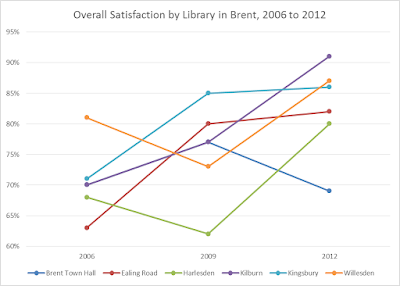 The full figures for the graph above are here: