Changes in Library IT Use I was talking recently to someone who works in IT who told me that he thought deskbound PCs like the ones in Wembley Library pictured above were archaic, and that the future lay with iPads.  If true that would have a number of implications for library design.

Of course, public libraries are likely to continue to have devices for patrons who can't afford their own, but these are more likely to be stacks of ipads, like the ones below (also in Wembley Library). 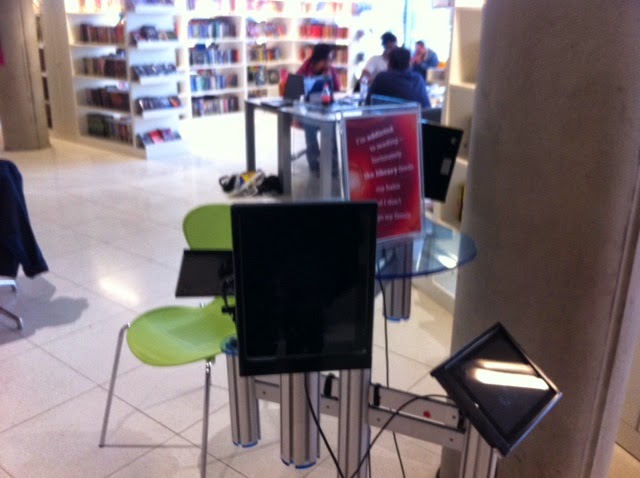 It will be interesting to see how successful Wembley Library iPad lending service has been, as I suspect many people are probably still not aware of it.

However there seems to be an increasing trend for users to bring in their own devices.  This means that libraries may need to shift their emphasis to empty table space for laptop users (designed not to have too many trailing wires), and also softer seating for people who want to sit in an armchair and read.  Taking a longer term perspective, I suppose this is merely the latest in line of changes since the days when you had to stand in a library reading a chained book at a lectern.
Posted by James Powney at 09:04