Seema Malhotra MP has recently been arguing that, in explaining the last General Election result, age is becoming more important and class less so.  This view has a lot to be said for it.  Labour support has gone up among ABs, although the Tories retain an edge.  Equally Tory support has risen among DEs although Labour retains its traditional lead.

However, it is also possible to see age as an expression of a sort class.  Older voters are more likely to be home owners, who tend to be more Conservative.  They are also more likely to be private landlords, albeit on a modest scale.  Younger voters, meanwhile, are more likely to be trapped in "generation rent" where the combination of the "gig economy" and very high rent and service costs for housing combine to put them in a position where they can't save enough for a deposit or demonstrate a regular enough income to get a mortgage.

Public policy is often designed to appeal to either renters or to owner occupiers.  Landlords may well have policy preferences that directly opposed to renters.  Below is a chart I have plagiarised adapted from some recent House of Commons Library research.  It shows those who have paid off their mortgages (also most likely to be private landlords I suspect) are the most pro-Tory group, whereas renters have a strong Labour bias. 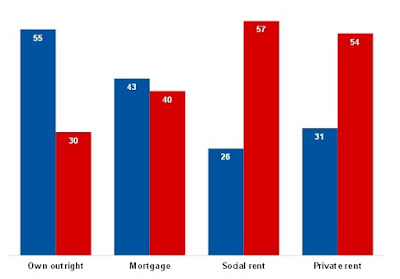 This is just one more aspect of what was a very confusing and hard to understand election result.
Posted by James Powney at 08:37